At the CARO Annual General Meeting held in October 2019, our latest scholarship winner, Michelle Bale, shared about her experiences while on elective in Botswana. Read more about her elective below! For more details about her, see the Previous Winners page.

In my fourth year of postgraduate training in Radiation Oncology I had the opportunity to do an eleven week elective in Gaborone the capital city of Botswana. The elective was in Radiation Oncology, offered both clinical and research experience, and allowed me to work in both public and private hospitals.

The Country of Botswana

Botswana is a sub-Saharan African country bordered by South Africa, Namibia, and Zimbabwe. It is largely covered by the Kalahari desert centrally with rich safari parks in the north and the capital city of Gaborone at its southern border with South Africa. Botswana is a middle-income African country with a rapidly growing economy driven by diamond mining, tourism, and beef export. It is a relatively safe country and is rated as one of the least corrupt countries in Africa. One of the country’s biggest struggles is its high prevalence of HIV – the third highest in the world after Swaziland and Lesotho. Although prevalence rates have been estimated around 25% of the general population, the people of Botswana benefit from a public health care system that provides anti-retrovirals for all HIV positive citizens. With high rates of HIV there are high rates of cancer and cervical cancer is the most common presenting cancer for treatment in Botswana.

Botswana has one linear accelerator and one HDR brachytherapy suite that services a population of approximately 2.3 million. Both of these are in Gaborone and both are in a private hospital. The linear accelerator is a modern Elekta Versa HD capable of delivering VMAT treatment but is not yet set up for this so therapy is delivered using simpler techniques. Patients seen in the public health care system who need radiation therapy as part of their cancer care receive funding from the public health care system to be treated at the private hospital. A typical treatment path for a woman diagnosed with cervical cancer in Botswana under the public health care system may be the following. A biopsy is obtained in the community following either detection of abnormal cells by screening or development of symptoms. The woman would travel from her community to the multidisciplinary gynecology clinic in Gaborone. Prior to being seen at this clinic, she would obtain blood work, a chest x-ray, and an ultrasound for staging. After being evaluated at the multidisciplinary clinic, if she requires treatment with chemotherapy and radiation therapy, she would have forms completed so she can be seen and treated at the private hospital. She would be evaluated again at the private hospital to ensure agreement with the recommended treatment, then receive chemotherapy, external beam radiation therapy, and brachytherapy at the private hospital. During treatment, patients stay in Gaborone either with relatives or on the ward at the public hospital. Following treatment, she would return to her home community. Many women are enrolled as study participants and have follow-up through the multidisciplinary clinic.

My Experience on a Radiation Oncology Elective in Botswana 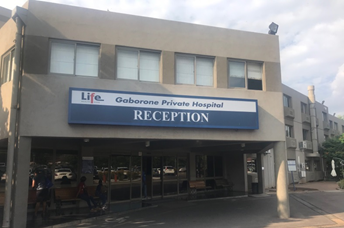 Over my eleven weeks in Botswana, I was able to work at Princess Marina public hospital, primarily in the multidisciplinary gynecology clinic, as well as at Gaborone Life private hospital where the linear accelerator and brachytherapy suite were housed. A typical day at the multidisciplinary clinic in the private hospital would include the following. Patients arrive at 7am to check-in and begin to be seen by doctors at 8am. Women are seen individually for review of their staging investigations, history and physical exam, final determination of stage, and treatment recommendation. If they require a translator, a nurse is often available to help. The clinic finishes when the last woman has been seen, often around 3pm. My time at the public hospital included a mix of new patient assessments, treatment planning, and brachytherapy insertions. On days not spent in clinic, there is ample opportunity for work on research projects. Through the Botswana-University of Pennsylvania partnership, robust research databases on cancer cases, treatment, and long-term outcomes have been developed to guide cancer care in the country. Following my elective, I was able to explore the beautiful country of Botswana and even take a safari through the northern parks of Moremi, Chobe and the Okavango Delta which was absolutely incredible.

The Importance of Global Health Electives

For me, a big part of the value of the elective was experiencing cancer care not just outside of Canada, but outside of the setting of a high-income country. Although this was a small component of my postgraduate training, a large part of the world receives cancer care in settings like Botswana. I believe it is important for health practitioners to be aware of the diversity of access to health care and delivery of health care around the world. To me, exploring this in residency is an excellent opportunity. It has enhanced my ability to understand patient experiences in those coming to Canada from low-middle income countries and has opened my eyes to the opportunities there are to contribute to global health and particularly global cancer care in the future.

This site uses Akismet to reduce spam. Learn how your comment data is processed.

The Canadian Association of Radiation Oncology (CARO) Global Oncology Committee’s mission is to promote the work of the multi-disciplinary Radiation Oncology team in developing countries and to provide an information portal for CARO members.